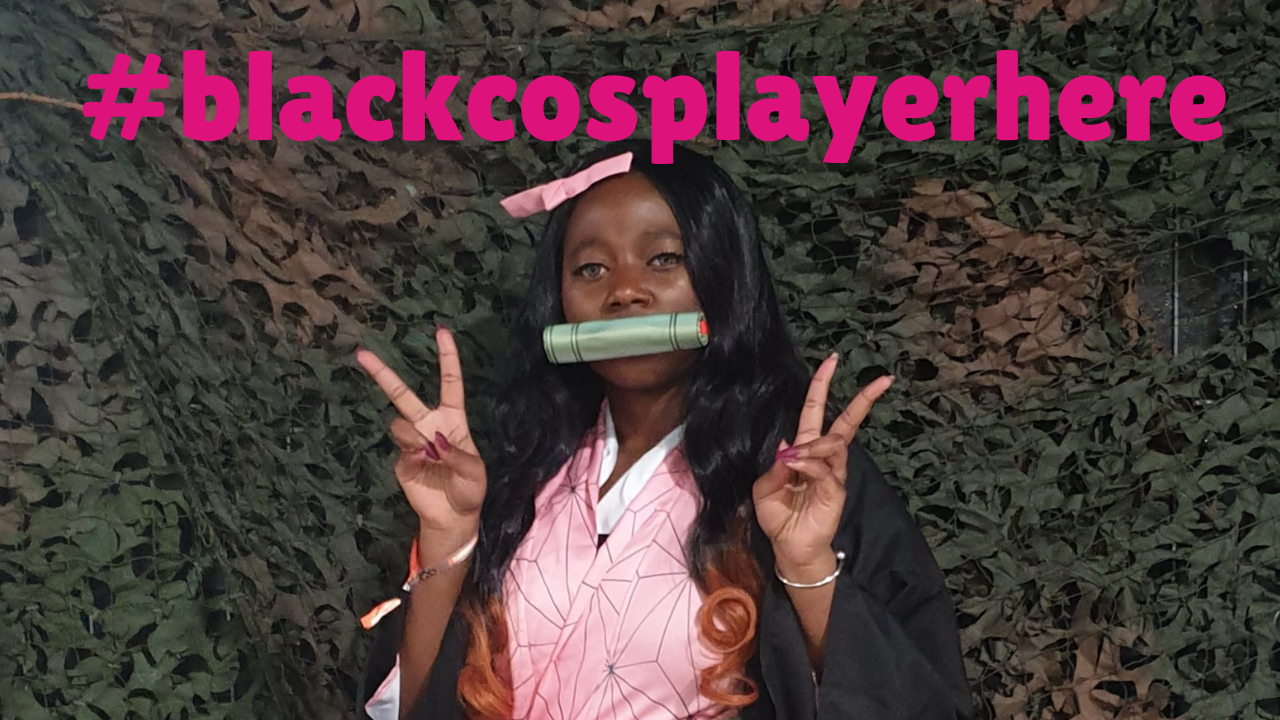 Recently a black cosplayer by the Twitter name Vaelniel_ went viral with her first ever cosplay of Nezuko from Demon Slayer.  Unfortunately, soon after the same non-inclusive narrative came across that people of color hate to hear (another cosplayer mamamiyacosplay had to deal with a similar incident earlier this year). Why is a black person cosplaying as a non black anime character? Well I will tell you why. Because we can and we do look damn good doing it!  Vaelniel_ account was bullied and harassed until she went private, which sparked the # blackcosplayerhere movement.

Let’s take a look at what the words anime and cosplay even mean.  Anime (a style of JAPANESE film and television) and cosplay ( costume play, especially one from JAPANESE genres of manga and anime).  So in all honesty, the bullying from any non-POC  doesn’t even make sense and is never justified, especially since the source material is usually from a foreign culture.

If you read my Blerdcon 2019 mega post, it was my introduction to the world of black cosplayers specifically. I never knew that it was so vast and excellent. The lovely group of @blackcrystalcosplay_ @kingkitsu @yakfrost @ladylunastar eloquently explained in graphic detail this same scenario from their own points of views how racist toxicity has affected them.  At this point we have gone to multiple differents cons, and the narrative from black cosplayers is always the same – “Hey look it’s a Black (insert characters name) and not that is a good looking (insert character name).”

Black cosplayers, YOU GIVE ME LIFE! For so long, I let the fear of judgement from ignorant ppl keep me from cosplaying. Seeing y’all go to cons, cosplaying ANY character you want, inspires me! We are inspiring future generations????So keep posting&sharing magic✨#BlackCosplayerHere pic.twitter.com/fbCb0jeUMq

i love ur nezuko cosplay @vaelniel_ !! keep it up, you’re doing great! pic.twitter.com/WK0yyCRS8o

It’s so dishearteningly to see blatant racism toward people that are just trying to enjoy a hobby by sharing their love of a character. We need to do better as a community. Cosplay needs to be safe for everyone

#BlackCosplayerHere who is so sick of getting told the character I’m playing isn’t black ???? pic.twitter.com/lX7Kj0JZlv

It’s that time again to tell people why we cosplay. LISTEN:
1. I cosplay to make poc cosplayers know you can cosplay anyone
2. I cosplay because it’s for everyone
3. I cosplay so the racists asshole know I’m here and having the time of my life
#blackcosplayerhere pic.twitter.com/wCi4G7aVCq

It’s that time again to tell people why we cosplay. LISTEN:
1. I cosplay to make poc cosplayers know you can cosplay anyone
2. I cosplay because it’s for everyone
3. I cosplay so the racists asshole know I’m here and having the time of my life
#blackcosplayerhere pic.twitter.com/wCi4G7aVCq

With recent events, its time for a cos-positive SHARE TRAIN!

WHERE ARE MY BLACK COSPLAYERS AT!?

Non black cosplayers, this is your time to show solidarity. Share their work, follow em. Show them love ❤️#blackcosplayerhere pic.twitter.com/p5CK2BnSaq

Vaelniel_ your cosplay was absolutely beautiful and stunning!  I know it was your first attempt at cosplay and you nailed it. Just know you have the support of a full community behind you! DO NOT STOP COSPLAYING. Embrace this and show the bullies that you can cosplay whoever and whenever you chose.