NOIR IS THE NEW BLACK KICKSTARTER

Today’s indie comic is actually an anthology of stories in one graphic novel called Black Noir. Kristal Adams was kind enough to put this on our radar and we had to check it out. Black Noir mixes the classic Noir style of fiction with a Black point of view. This Kickstarter Project was started by Fair Square Comics, which was created in June 2019 to develop, publish and distribute new comics created by Fabrice Sapolsky and his amazing friends. Fair Square Comics was also founded with the ambition to be the first comic book “think tank”. Publishing content from minority and underrepresented creators as well as immigrants.

There have been many Black Noir movies and comics in the past, but this is a new collective effort by Black American comic book creators, writers, and artists. The project is 100% creator owned and has some serious talent on the team:

This collection will be curated by blogger/writer and up and coming editor TC Harris with Fabrice Sapolsky.

TC Harris defines himself as “a passionate Black man with a desire to uplift his community”. He loves comics, their creators and understands the incredible need for true representation in comics. As an East Coast traveler, TC has spent time in both New York City and Baltimore City where his love of comics grew and morphed into a passion for all aspects of creation. Although TC has worked as an IT professional for over twenty years, he has always engaged with the comic and video game community through conventions including Baltimore Comic Con, Awesome Con and East Coast Con, among others.

via The Black Noir Kickstarter

A true storyteller, Fabrice Sapolsky can write, draw, letter and edit any comic book. His debut comic book as a writer was Spider-Man Noir for Marvel Comics (with David Hine). Then he switched to creator-owned comics with One-Hit Wonder (Image Comics/FairSquare Comics) and Intertwined (Dynamite Entertainment). Breathing comics night and day, Fabrice also served as Senior Editor at publisher Humanoids where he developed the  H1 Comics and BiG imprints.

via The Black Noir Kickstarter

The Black Noir Kickstarter is live now, so make sure to support this project. Here is the link to check out more about Black Noir. 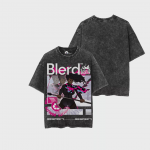