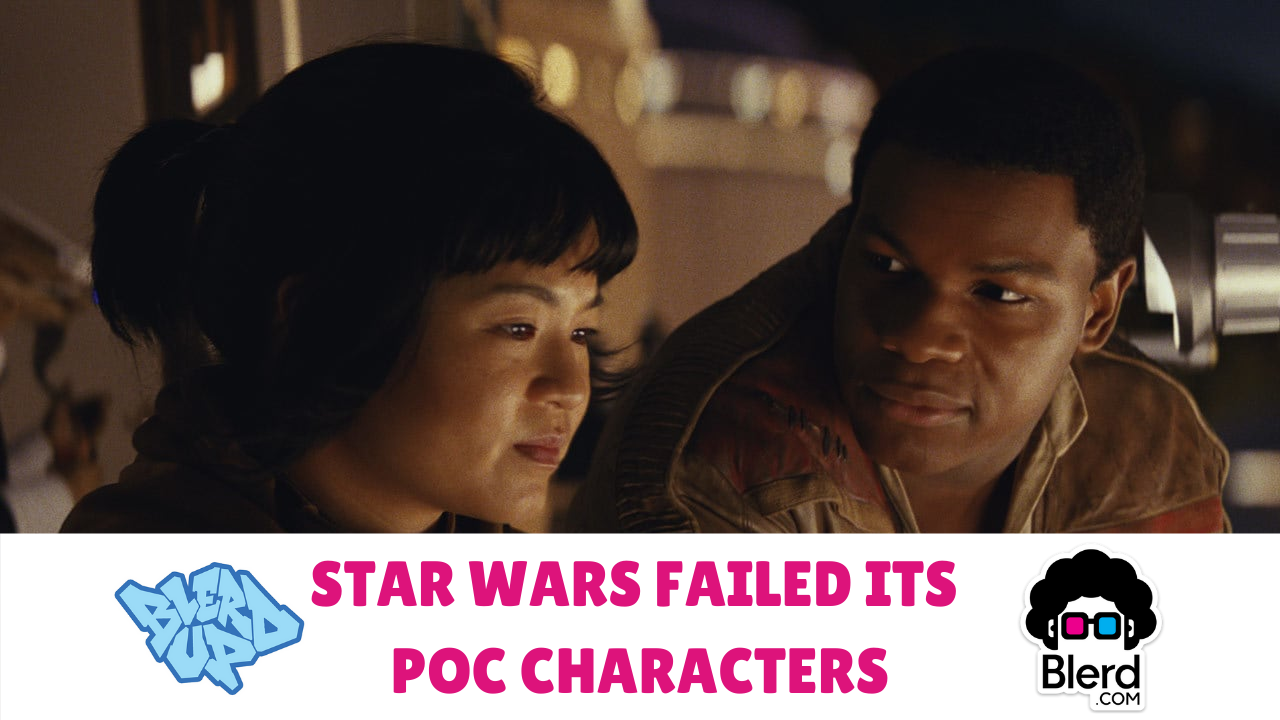 I’ve been watching Star Wars since I was in middle school. Every day for weeks, I bought Doritos chips to collect and trade lenticular pogs that celebrated the release of the Special Edition films. I still have them to this day. I bought Expanded Universe novels. I’ve watched nearly all of the TV shows. No-one can say that I’m not a big fan.

When the first trailer for “The Force Awakens” came out, I was excited to see a young brotha finally be a lead in one of the biggest franchises of all time — and he was a Force user! With John Williams’ score and Lupita N’yongo’s voice in the background, John Boyega’s Finn ignited his lightsaber against the new villain Kylo Ren. I nearly cried. Every poster reinforced the notion that Finn would be a force user. Move over, Mace!

When the movie finally arrived, I was beyond hype. In the opening scene, Kylo Ren stares curiously at Finn, then a stormtrooper, reluctant to shoot innocent villagers. What does he sense in him? Soon after, Finn escapes his servitude as well as helps Poe Dameron escape captivity from the First Order. Reminiscent of Luke and Han’s scene in “A New Hope”, Finn shoots down TIE Fighters, turbolaser cannons, and missiles.

But soon the attention turns to Rey as the new Force-user. Finn’s character also reveals cowardly traits, a 180 degree turn from how he is introduced. At Maz Kamata’s tavern, he decides to run away from fighting the First Order.

The film starts to redeem Finn, however. Maz hands him Luke’s lightsaber to help save Rey. He fights a Stormtrooper with it, and his aim is as impeccable as anyone’s as he shoots down troopers. Abrams keeps me guessing. When Finn finally raises Luke’s lightsaber against Kylo Ren, as shown the trailer, I thought the time had come to finally reveal what blerds were looking forward to. I cheered as Finn injured the grandson of Anakin Skywalker, a man who froze blaster fire in mid-air. But he is soon bested, and Rey takes down Luke’s fallen apprentice. IndieWire’s Andre Seewood labeled Finn’s role here as “hyper-tokenism”.

Finn not being the potential Jedi that was marketed was a big shock. I felt like a rug was pulled up from under me. Rey was literally a nobody from nowhere. A former Stormtrooper who rebels, discovers Force powers within himself, and helps defeat his captors would have made for a fresher and more compelling story, in my opinion. The struggle with the dark side could have been explored through the lens of trauma, instead of lazily milking the bloodline story and bringing back Palpatine. It would’ve also made some of Rian Johnson’s choices on Canto Bight more important (more on that later). However, I liked Finn, his chemistry with the cast, and saw potential for him in the next movie, Force-user or not. But I still had some hope for the former.

“The Last Jedi”, introduced a new person of color — the mechanic Rose, played by Kelly Marie Tran. She is funny, loyal, and full of heart & courage. She also helps come up with a plan that, given a different script, could have saved the Resistance in their most desperate hour. In the novel that was released simultaneously with the movie, she and her late sister Paige developed stealth technology for bombers. There was more to her character than the movie revealed and what haters gave her credit for. She was a cool addition to the new cast.

Despite Rose’s talent and heart and what “The Force Awakens” set up for Finn, they are wasted in “The Last Jedi”. Like Rey in the first film, Rose has an admiration for Finn. Unfortunately for Finn, he is reduced to being focused on Rey, who we all know didn’t care much at all about him at that point. Even worse, his arc of being a coward and then redeemed by the end is repeated in this movie. He tries to abandon the Resistance just to be safe with Rey, betraying other friends, like Poe, in the process.

Then, the only people of color are sent away from the main story to an ultimately superfluous side mission on Canto Bight. Although it had potential for world-building and advancing the story, it has been universally regarded as the worst part of the movie. Moreover, the themes and concepts that were raised were never addressed in the sequel. For instance, the children (one of them being Force-sensitive) that Rose inspired with her heroism were never seen again. Rose and Finn, former child slaves of color, inspired other child slaves to rebel and we never learn of their fate. Truly wasted potential.

Rose gives one of the best lines in the movie when she saved Finn from sacrificing himself: “That’s how we’re gonna win. Not fighting what we hate; saving what we love”. When she kisses him, the potential romantic vibe is ruined with Finn’s almost disgusted look on his face and director/writer Rian Johnson’s choice to drop the development there.

In “Rise Of Skywalker”, Rose is almost completely benched. More time is given to chasing the MacGuffins that were Wayfinders, fitting in needless nostalgia, a convoluted story, and new characters who got very little exploration as well. You wouldn’t know from the movie, but Rose is the leader of Resistance’s Engineering Corps. But of course nothing comes out of that. She doesn’t even interact with Rey in either of the movies, even though a scene was filmed. She is asked to stay behind to think of contingencies in case the main mission fails. Her possible romantic relationship with Finn or her own feelings are never addressed again. After a brief exchange, Finn gives her a pat on the back before he heads out on the main mission. That pat could be taken as meta for her tokenism in this trilogy.

From there, the movie starts to redeem itself. Out of everything in the Rise of Skywalker trailer, I was most excited about the first Black female character with speaking lines. Jannah, like Finn, was a former Stormtrooper who was conscripted into the First Order as a child. Her entire company committed mutiny. She reveals that they had a “feeling” that led to it, which Finn identified as the Force. Jannah’s group escaped to Kef Bir, where she became their leader. Not only do we have a strong Black female character (with natural hair!). She also has the means to help the main heroes. Furthermore, she is integral to the final fight because her bombs destroyed a crucial navigation tower.

The last act is a bit uneven. The fight against the Final Order gives Finn some time to shine as a leader and his actions finally have real effect on the main plot. With his new comrade Jannah beside him, he destroys the command ship and leaves the Final Order’s fleet paralyzed in the air. While Rose gets a brief second of running into fray, she is told to leave when matters get more serious. Moreover, during the victory celebration, she is relegated to hugging Chewbacca, who she had never previously met on screen, instead of embracing the person she loved. After all of the bullying and trauma that Kelly Marie Tran endured, this chapter in her story ended in a sad way.

Finn is also slighted here. After two movies of us blerds wondering about his Force potential, this movie finally answers the question. However, if he was Force-sensitive, why didn’t Leia, presumably a Jedi Master, sense this in him before and train him? Why didn’t Maz Kanata recognize his potential in the first or third film? JJ Abrams confirmed in an interview that Finn wanted to tell Rey during the entire movie was that he was Force-sensitive, not that he loved her. Even though it became a recurring gag, there was no emotional payoff for something that monumental: the only new person without a special bloodline to develop Force abilities. Unlike Leia and Luke having their exchange about their relation to each other, Finn never got to reveal his secret to his Rey. What a waste.

Jannah’s post-victory scene is also rough. Lando’s exchange with her is regarded among many as creepy. Frustrating fact: the Visual Dictionary companion for the movie hints that Jannah could be Lando’s long lost daughter! Instead of exploring that with a more somber tone, Lando appears to be hitting on a woman probably three times younger than him. Also, given that she also had a “feeling” similar to Finn before her mutiny, she could have had Force potential. But that was unfortunately not explored. She was a leader of a guerrilla resistance group from the beginning. As far as we know, she didn’t have the cowardly arcs that Finn had. She appears strong from the start and deserved more than what she got.

Statistics show that people of color are boosting box office numbers more than ever. Those statistics also prove that diversity is dominating the box office. I still remember watching Black Panther in a packed South Korean movie theater. I observed a small child on the edge of his seat as T’Challa battled Killmonger for the throne. I remember couples and families laughing with Shuri and marveling at Okeye’s strength and resolve. Some of my students have dressed up as Black Panther for Halloween or pretended to be him on the playground. The newest Star Wars trilogy does not inspire that kind of movement. While Black Panther embraces the present and points to a genuinely inclusive future, watching these new Star Wars films truly feel like an era from ‘a long time ago in a galaxy far, far away…’

Look forward to our in-depth spoiler podcast of “Rise of Skywalker” on December 30th. The BlerdUp podcast is on Apple Podcasts, Spotify, and other platforms!